“Burnt Mound”, not a very auspicious title for a rather enigmatic monument – a place for heating rocks to heat water – first found from the Later Neolithic-Early Bronze Age some four and a half millenia ago –  a mundane description of their form and contents of hearths, troughs and heated rocks. Yet these were probably places of drama where poorly chosen hot rocks split and splatted around the hearth, probably why the Meur Burnt mound had an enclosed hearth – see a short animation of this great reconstructed site here. 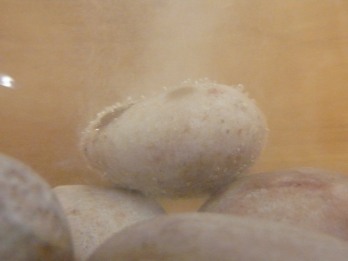 There has been considerable speculation as to what was going on at these sites and now after excavations we can see there are certain common themes that run through, or should that be flow thorough, these sites. Water from a small stream by way of a cut or small leat was introduced into a trough this was then heated by dropping hot rocks, heated in embers, into the water, simple! The rocks were then discarded and generally form an open horseshoe crescent around the trough; the question is, was this used for cooking, sauna or mashing malted barley?

The the answer may well be that these were multi-functional structures, however many now suggest that brewing was an integral part of their purpose, see Merryn Dineley’s website and the excellent Billy and Dec’s Bronze Age Beer video. These  sites are ubiquitous, found across Britain and Ireland and are particularly prevalent in Northern Scotland.

Here in Cumbria several burnt mounds have been identified and several excavated and at Sizergh Estate an in-situ timber trough was found; where, in common with other sites waterlogged timber survived due to the boggy conditions .

This rather diminutive version can be found in the valley at Buttermere, the trough would have been where the rushes are,  this one is close to some cup marked rocks, however those found in Scotland take on altogether grander proportions with the permanence of their stone lined troughs, here seen at Liddel Burnt Mound on South Ronaldsay, Orkney Isles.

This fine example below is two metres high and ten metres wide and sits in strange juxtaposition with  Eriboll Church, on the north coast of Scotland. Presumably the builders were unaware that the heather covered mound was a place of prehistoric activity producing the heather ale – demon drink of the Bronze Age – see – in true Scottish tradition someone has left a modern offering at the base of the mound, to give some scale to gauge it by. 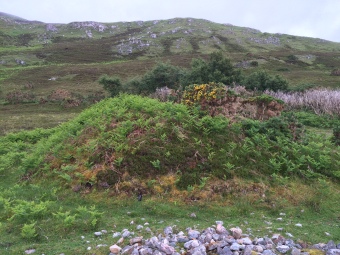 Now in their wisdom the Edinburgh craft brewers Innis and Gunn have produced their own limited edition version of this ale and so it had to be sampled! 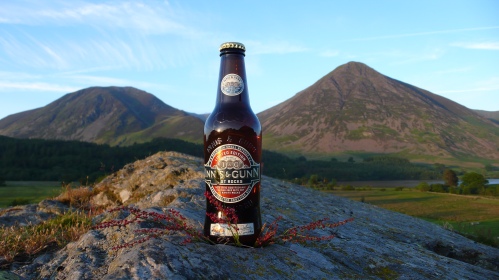 Upon a cup marked slab on a sunny evening seemed an appropriate place to sample this herbal homebrew, a mildly bitter beverage with a slight herbal aroma.

Bottle conditioned, balanced carefully when carried the half mile from home, perhaps it should have been buried there to condition – its twin might have to endure this fate and brave the bullish cattle’s curiosity for buried things.

Decanted from its sediment a straw coloured ale with echoes of honey,

Surrounded by an amphitheatre of mountains shining bright bilberry green as the yellow, mellowing sun dips towards the north. 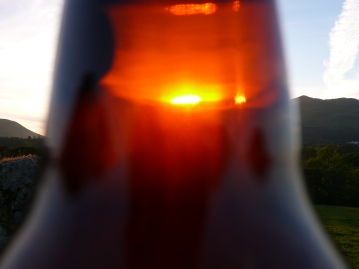 With a deep draught of strong nourishment, the dying sun carries the cares of daytime away,

Seen through a glass darkly – the burnt amber ale haze’s the sun with swirls of yeasty magic, 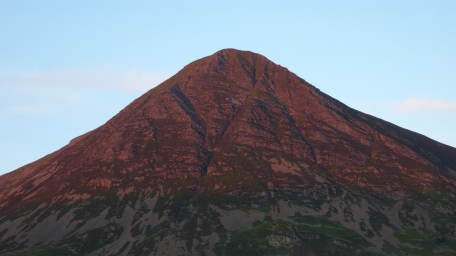 Sun sets beyond the horizon, while mountains hold the light, changing from bronze to pink

Rising from the valley to meet its night.

Notes and Acknowledgements: It fell to an inspiring session at TAG; Stoking the Flames:Towards an Archaeology of Fire, to persuade me that burnt mounds were not as boring as they sound! A paper from Lauren Doughton of Manchester University entitled Born of Fire: An exploration of the role of fire and fragmentation in the creation and use of burnt mounds I found particularly inspiring using some experimental firings which demonstrated that these were dynamic exciting and dangerous places to work which in itself must have created a performance and mystique around their use, the more so if we accept that perhaps the primary function was to produce ale!

“…other private functions” –  prehistoric revellers from the Bronze Age included?