Here in Cumbria late September was glorious for the annual C-art fortnight, an event where artists and crafts people open their studios and workshops to the public. This year one art installation was set on top of Scafell Pike, the highest art installation in England. The title was intriguing so this seemed like a good chance to take advantage of the Indian summer and get out on the fells to take a look; it appeared rather roughed up by the elements.

On my walk up here from Sty Head along the Corridor Route I had been thinking about the connections that this installation had to other activities that have taken place here. Over  the millennia this place has seen a variety of “performances” taking place, from the musical “clink-clink” as stone was knapped into stone axes over  5600 years ago to Alice Fancis’  “The Hilltop Rest Hotel …a boutique hotel which provides a welcome break for nature-loving and travel weary birds alike” which I am told was carried up here in procession.  So too the roughly shaped stone axes knapped up here might well have been carried down the mountain in procession, secure in their leather bags or baskets. 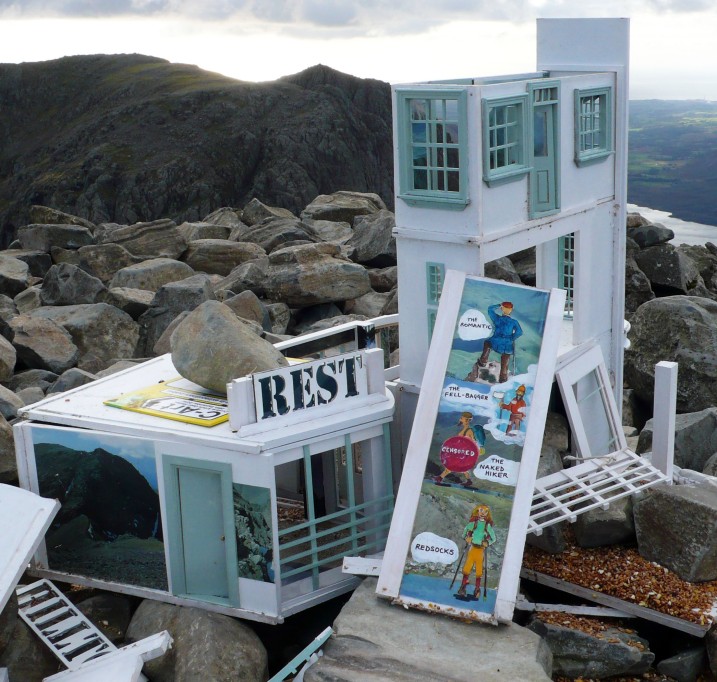 Like the characters drawn on the hotel wall the hunt for the source of the rock from which stone axes were made  had something of a “Boys Own” adventure about it as archaeologists and climbers scoured the screes for evidence of the prehistoric prospectors.  These axes, found across Britain, were known to be made from volcanic tuff which had its origins in the Cumbrian Fells and can be worked like flint; however they were originally thought to have been made from boulders that were glacially transported further afield.

The first clue of a production site in the Fells was in 1918 when palaeontologist Professor DMS Watson, who was working on fossil plants in the North East’s coal measures, observed the hand of man had been at work on some stone eroding from the peat on Mart Crag, Great Langdale; a small excavation established that it was indeed a small stone axe working site. They were getting warmer, but it was another thirty years before Ulverston couple Brian Bunch and his wife discovered the iconic Stone Axe Factories on Pike O’Stickle whilst on holiday in Langdale. It took several more years for climber and Secretary of the Wasdale Climbing Club, Dick Plint and friends to identify where the first “Fell and Rockers” working sites were on the summit plateau of Scafell Pike, finding roughed-out axes as seen  in the foreground of this picture.

In the period in Britain known as the Neolithic, axe making was likely a right of passage for young people to prove themselves on this wild and barren plateau. Perhaps they slept up here for a night or two but even in summer with the climate a little warmer back then, this would have been a hazardous place to work. Strewn with weathered and fractured rock with hardly any green to be seen, exposed to the elements, heightening the sense of drama with only the elders knowledge of the safe paths avoiding the precipices to guide people back to the security of the valley and their coastal settlements where the axes were finished. Many of the axes found are beautifully polished and unused, ethnographic research in New Guinea has shown that there is a strong element of ritual in the way that stone axes are handled. Thus with Cumbrian axes we find them deposited in bogs and rocky crevices sometimes unused at the end of their or their keepers lives.

As I linger on the summit around me small performances take place; a man asks me to take his photo as he strikes up a suitable heroic pose, a group takes the inevitable selfie. On just about every day of the year people perform small ceremonies here on the summit cairn of Scafell Pike; from cracking open of a can of beer to the scattering of human ashes that percolate down into the frost shattered rock.

Walking back across Broad Crag I see a newly split block where some 21st century rock prospector had been at work. A fine-grained tuff – people don’t change that much do they? 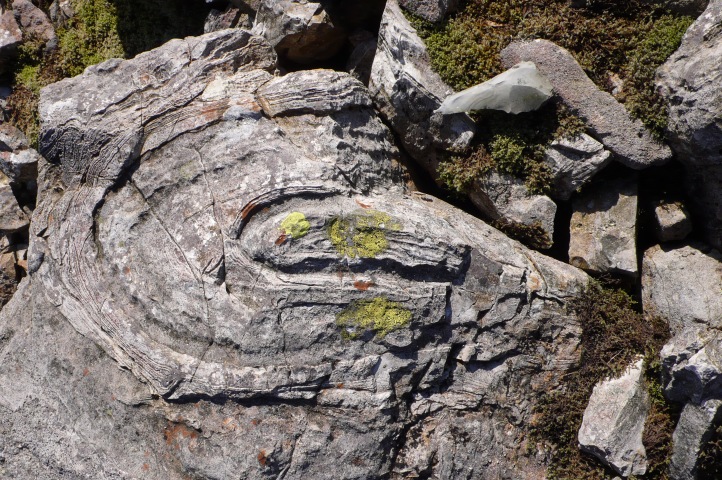 Alice Francis can be found at http://www.peoplespalace.net/home.html

Further information on the Stone Axe Factory discoveries can be found in the Transactions of the Cumberland and Westmorland Antiquarian and Archaeological Society http://cumbriapast.com/cgi-bin/ms/main.pl?action=transactions