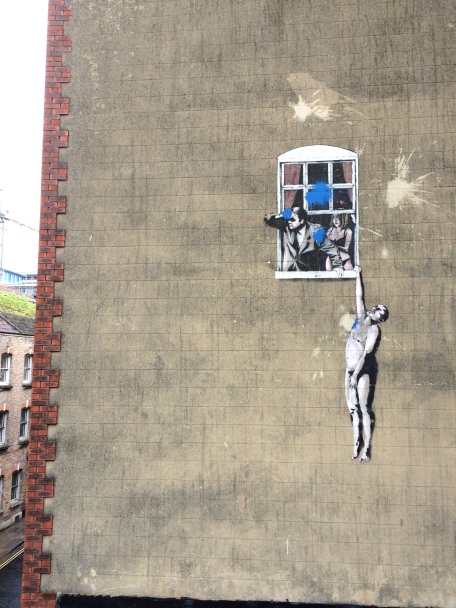 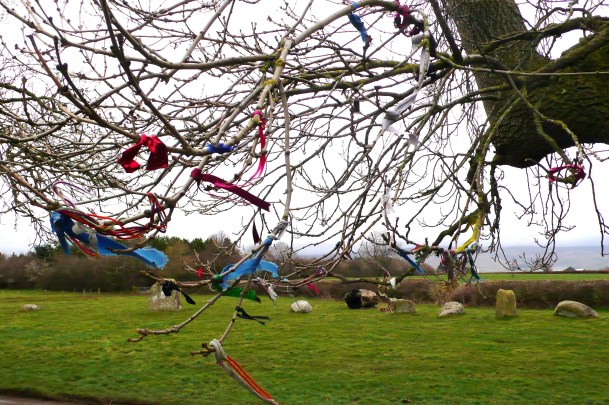 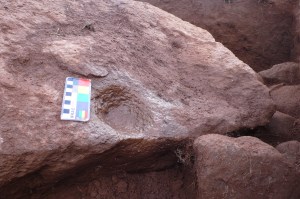 Dunmail Raise, an axial point in the Cumbrian Mountains crowned with a massive cairn, mythically associated as the burial-place of the last King of Cumbria, but variously described as a memory cairn, boundary marker between Westmoreland and Cumberland or prehistoric burial cairn. It could perhaps be all these things, yet it is now sitting ignominiously in the central reservation of the A591 which also truncates it somewhat.

However in the light of a recent field survey south of the pass there is a strong suggestion that it may well have prehistoric origins. Here we recorded dozens of cairns many apparently pasture clearance cairns but others more structured are perhaps more likely to be burial cairns. In particular a group near the top of the pass clustered around a large boulder in close association with the spring rises on the west side of the pass and within sight of the Dunmail Raise Cairn.

It is clear that this natural route-way dividing the Lakes – the Coniston Fault – must have seen use from prehistoric times; cup-marked rocks and a stone axe were found at the north side of this pass at Wythburn, shown above – now largely submerged. So it appears this pass was “marked” at least from the Bronze Age.

Historically thee was more accessible land at the head of Thirlmere prior to the flooding of the two lakes of Leathes Water and Thirlmere by Manchester Corporation. Whose aqueduct burrows under this route, and in their wisdom the AA still maintain their phone box adjacent to Raise Cottage, the old Isolation Hospital; on a cloudy day almost as bright as a West Cork Cottage.  Surely an iconic place in the landscape!

Old mapping shows stones recorded at Dunmail Raise, which was variously written as Dunbalrase, Dunmel Raise and Dunmel Wrays, but does this refer to the cairn, lost boundary stones or even prehistoric standing stones.

The symbol used was synonymous with that used to describe the Three Shires Stones at the summit of Wrynose Pass where the historical counties of Cumberland, Westmoreland and Lancashire met; both shown here on John Speed’s map c.1611.

These were shown on Saxton’s 1579 map and described at the time as three small standing stones about one foot high; more recently engraved recumbent stones and the modern standing stone, erected in the nineteenth century, have been placed there. But the symbol used suggests that there may have been upright standing stones present on Dunmail Raise at the same time.

So were there ever any such standing stones on Dunmail Raise? There is certainly a naturally upright outcrop at the summit of the pass which this symbol could refer to. 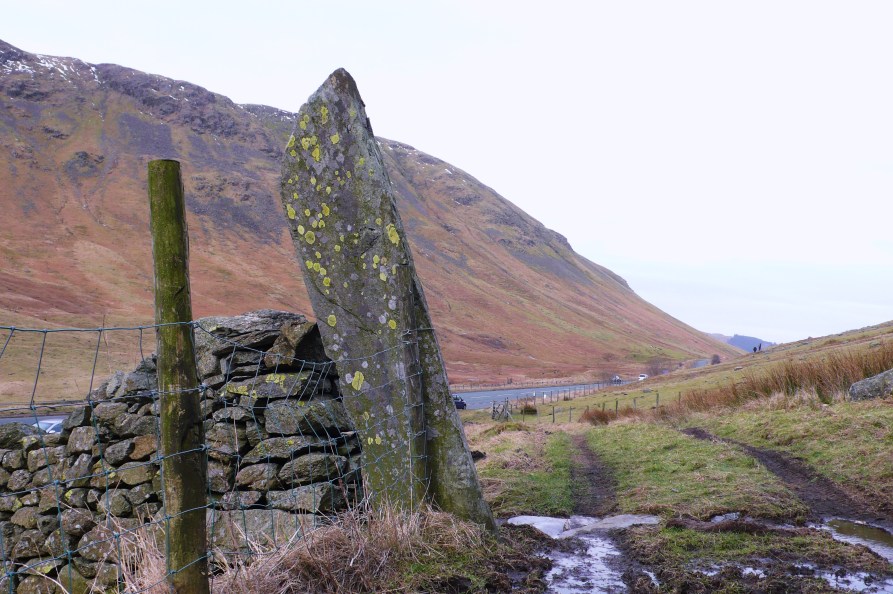 But during the survey I noticed a tall  “gatepost” in the enclosing wall of Raise Cottage, rather unusual as it was set in line with the wall rather than at right angles, like most gate stoops. It was also apparent that this was considerably more weathered than is seen on other gate posts such as this old example bored for poles instead of a gate.

Could this be one of the stones referred to in the mapping? This had clearly been present for some time, unlike that seen next to the phone box which had been removed for safety reasons from the dividing point of the carriageway since the survey. 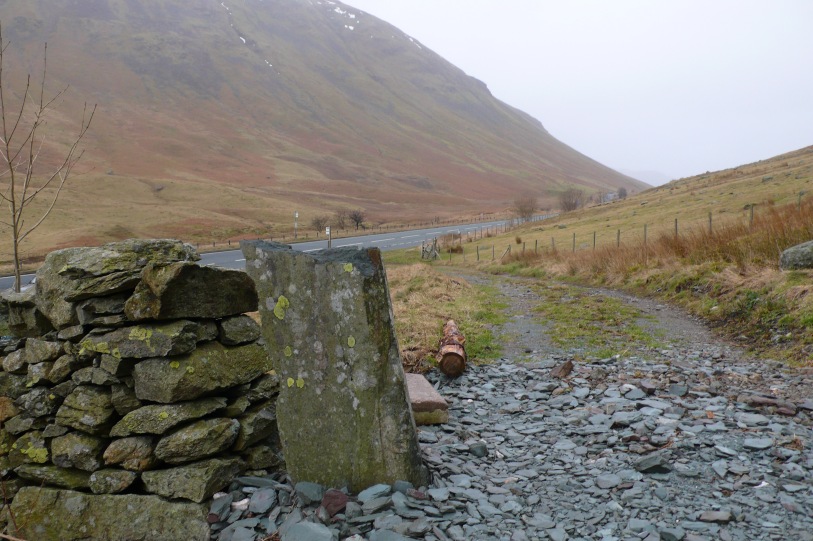 We shall perhaps have to keep musing on this stone, but on a recent visit it was apparent that an unfortunate accident had befallen it and now stands at half its height, not even a shadow falling from its former self on this dull day. 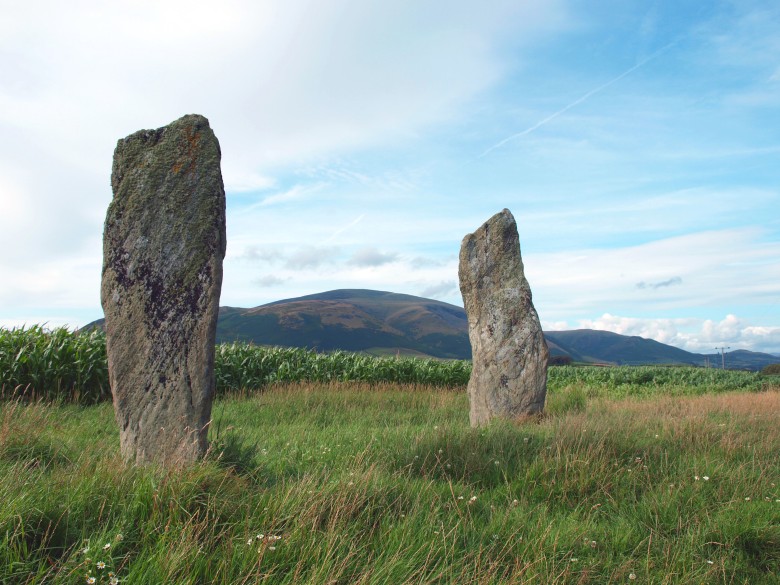 Further up the fault-line at Castlerigg there are stones that stand in a more convincing prehistoric pattern. Elsewhere on the fringes of the Lakes there are other prehistoric standing stones like this fine pair at Kirksanton, apparently cup-marked and marking the northern moonrise and southern moonset during a major standstill every 18-19 years.

Although we must still be a little wary of pairs of stones as they may not always be what they seem. Like so many stones that stand – sometimes its just hard to say where the truth lies.

Acknowledgements and Notes: Thanks to University of Central Lancashire and The Cumberland and Westmorland Antiquarian and Archaeological Society for providing funding for the Field Survey of Dunmail Raise and Greenburn Valley. Thanks also to The Urban Prehistorian for intriguing posts, to Roaringwater Journal, and Douglas Scott for the Archaeo-astronomy information  .