Walking across the centuries; imprints of people on the land, from summit  down to col and valley.

Places named by Shepherd and Herder for millenia,

Marked only by stone, re-arranged, 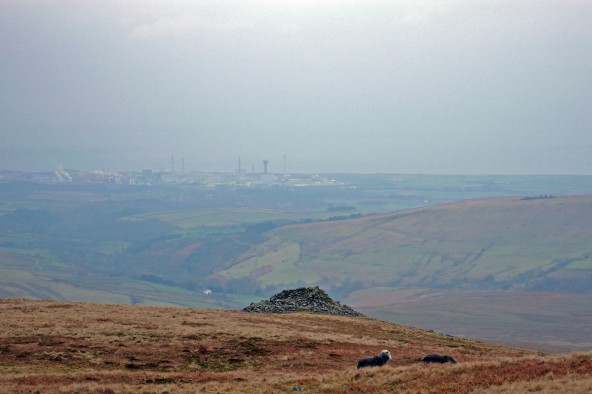 Cairn with a view,

Memories in bone and stone

Gaze to our future. 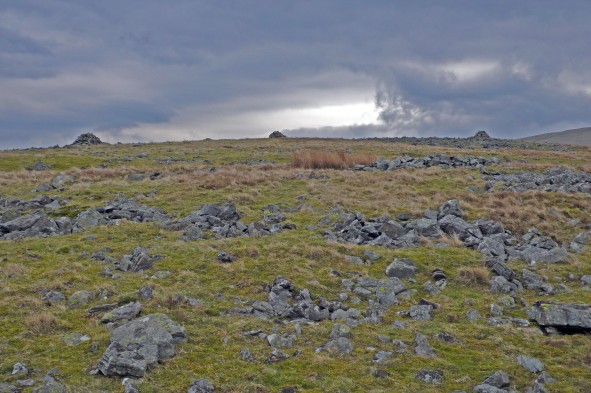 Watching, a calm reminder for the future from the past

Tranquility in rock under a darkening sky.

Guided by an equilibrium of rock and moss.

What are we waiting for?

Notes: The Western Moors of the Cumbrian Fells are liberally scattered with the archaeological remains of pastoralism from, arguably, some of the earliest days of agriculture in Britain. Lank Rigg like its neighbour Seatallan, see my previous blog, are both crowned with large prehistoric cairns.

The suggestion that this was a “sacred summit” to the prehistoric locals here is also supported by the fact that is surrounded by at least  a dozen ring cairns and it also has a similar number of round cairns and some long cairns to boot on its slopes and the adjacent fellsides. The more ephemeral features which also found here and have been identified other areas of the Lake District (see here) and elsewhere in Britain, where they are associated with Neolithic and Early Bronze Age features, they have also been recognised in many upland regions of Ireland, see here.

The majority of these features are recorded in the wide ranging and excellent publication by  Jamie Quartermaine & Roger H. Leech. Cairns, Fields, and Cultivation: archaeological landscapes of the Lake District uplands, other features mentioned were located more recently by myself.

The term clitter is a descriptive term I am particularly drawn to; describing the litter of stones left around the landscape in areas of moorland, coined  I believe, by Bender, Hamilton and Tilley on their research on Bodmin Moor and published in their fine book Stone Worlds.

The clitter-fields of Lank Rigg and Latterbarrow like those on Bodmin Moor are scattered with small ephemeral disturbances many with no apparent function others as potential shelters. Latterbarrow in particular has over ten cairns that are quite incongruous for such a diminutive summit, unfrequented by modern walkers.

The splendidly named Whoap, an adjoining summit above Ennerdale, certainly sounds like a name form an ancient culture 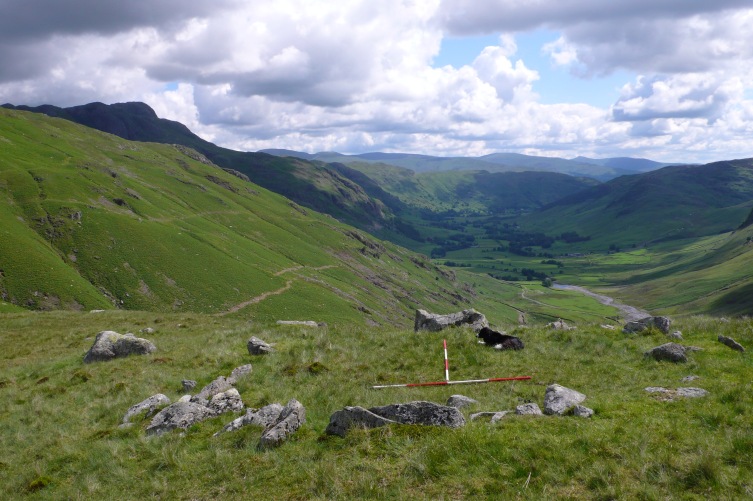 While winter snows lie outside its spring at Whorneyside ring cairn! There are numerous prehistoric monuments found throughout the Cumbrian Fells, some the subject of this blog, can be classified as embanked ring cairns with some confidence whilst others are more difficult to fit into existing typologies. Many of these are smaller more ephemeral structures that often occur in close proximity with the more definable ring cairns. 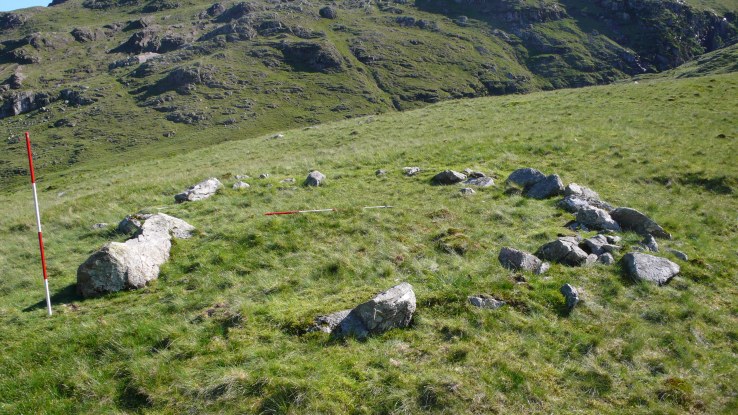 With an eye of faith we can see how this cairn may have looked when constructed.

Here at Castle How above Grasmere we can see a structure of the same diameter and construction with a more “traditional” stone banked ring cairn in the distance across the valley.

The neighboring valley of Greenburn also contains similar structures, this time orthostats are still extant with what may be a cairn central to the circle.

At Llyn Brenig in North Wales, an area with numerous excavated Bronze Age monuments  this ring cairn is on a much greater scale, perhaps reflecting the population of that locale.

Whilst out on Skiddaw the other day I was followed for half a mile by the Broken Spectre, it got me wondering what prehistoric people made of this phenomenon that we can now explain through physics.

Whymper’s vision on descending the Matterhorn

Even as recently as 1865 Edward Whymper descending the Matterhorn with his remaining companions, in his heightened state of anxiety following the death of three of his team,  interpreted the Broken Spectre as a vision.

People still build in the round on mountain tops.

Perhaps it’s the place we find ourselves in.

There is a fine trail to be followed round various Bronze Age monuments at LLyn Brenig: http://www.cpat.org.uk/walks/brenig.pdf