Thus the chant went out early in the morning at Woodstock as the somnolent – LSD weary –  space cadets arose, drawn from their slumbers by the mantra; it was Sly and the Family Stone getting funky. This was recently recalled in a BBC documentary and although never a great funkster myself the pounding rhythm that drives the music many find irresistible and the suggestion was that this was because of its rhythm that mimics the human heartbeat. So of course rock art in high places came to mind…

Well, despite the apparent nonexistent relationship between “Funkadelia” and rock art, it’s all about making human connections and this one concerns the auditory element in the creation of rock art. It can’t be avoided, anyone who has bashed two rocks together knows it makes quite a noise, outdoors with an amphitheatre of mountains the sound is amplified and  echoes too, adding to the effect. In a world free of sound pollution this would make a strong impact on people.

So the remote Weather Stones on top of Boulsworth Hill came to mind, where I had found an eroded cup-and-ring, cups and grooves on a slab and at an altitude of over 500m this must surely be a candidate for the highest rock art in England!

Here on the wild East Lancs moors the wind and water eroded gritstone blocks endow an otherworldly feeling to the place, it is transformative, liminal, between earth and sky;

the sun begins to set – a crack between the worlds

This is also a place of myth, also known as Lad Law with  Hill of Slaughter conveniently carved into the rocks below a solution hollow said to be where druids sacrificed…well people? 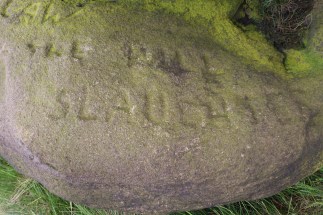 Runnels and grooves are also a feature of other rock art sites, most dramatically at Lordenshaw,Northumberland, another elevated site, arguably, set in a ceremonial landscape on the slopes of Simonside Fell, where a friend referred to them as blood gutters, mmm… a touch of hyperbole I hope! 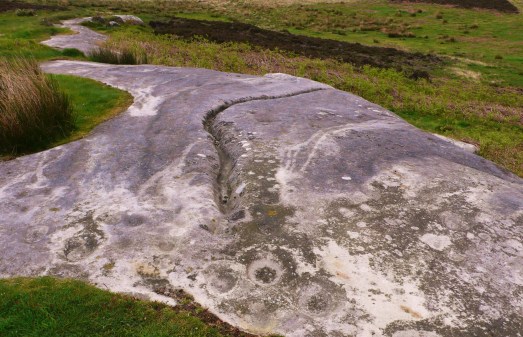 Now unlike the neighbouring Rombalds Moor, across the Aire Valley, this is a locale with rather a dearth of rock art although some cup-marks can be found on the easterly parapet of the pack-horse bridge at Wycoller which appear to be the sections of a broken monolith.

This is the setting for  Anne Brontes Wildfell Hall, she and her sisters conveyed the elemental nature of these moors well.

A sheepdog – wolf, the queen of hearts 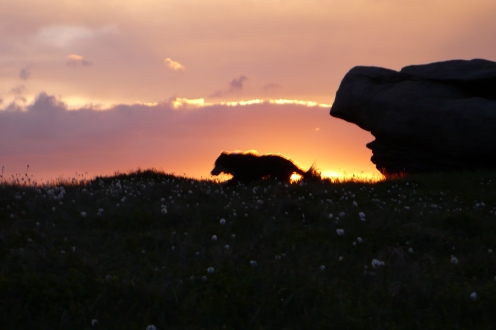 The auditory force of the rhythmic tapping would have only added to the dramatic effect of the place on any throng that might have assembled. Pounding rhythms using percussion have been used for millennia by shamanic types to create a trance-like out-of-body experience or to be technical Altered States of Consciousness. So we can see that the creative act of producing these rock-marks may have actually had more impact and was the more significant element in that process than the finished impression.

There has been debate over the years as to whether narcotics were used in British prehistory to attain altered states of consciousness, there are suggestions that this was so but on balance I would say the jury is still out. But human nature supported by anthropological examples suggest that  when people find something that intrigues them they use it, and when it means they spend some time out of mind, the thrill seekers do it. Of course there are many cases where this is used as a powerful tool such as in shamanic ritual, these days one difference is that these kind of drugs are available to buy should you so wish.

Coming back down to earth in Cumbria and the somewhat more prosaic. The lithophonic quality of the Langdale tuff or clinkstone as it became known has been noted by researchers and we also have a lithophone! The original (pictured) was made in about 1786 by Peter Crosthwaite from Skiddaw slate this, and a more sophisticated version that was played to Queen Victoria in London, is on display in Keswick Museum, I somehow doubt she was amused.

So some people still seek their escape from the  hum-drum material world. These days some find refuge in the heart throbbing frenetic drug fueled clubbing scene, others seeking flight can still be seen wandering the moors searching for solace, some of those questers you will notice with  their heads inclined earthward, sometimes looking for the eponymous liberty cap fungus, as perhaps people may always have done.

More about the Keswick lithophones can be found here

http://www.leeds.ac.uk/ruskinrocks/relevant-articiles.htm and at Keswick Museum

More on English Rock Art can be found here: http://archaeologydataservice.ac.uk/era/