Ripples Under the Rails

Beneath the crusty cast pillars

Forgotten tides ebbing from the foreshore,

From under the earth, drilled blown and split,

Block and tackle to wagon and rail,

Facing the shifting strands of the surging sea,

Memories of a weighty feat

Girder beams and rails run over the estuary

A mile of iron-y to carry its ore

Carrying the seeds of death south, 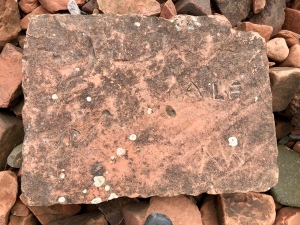 John Barleycorn calls across the waters,

Wobbling back over sleepers to Alba

Sabbath man is full of ale.

When Brunlee’s bridge was broken up

No McGonagall opus to immortalise the decaying

Remains across the brackish Solway

From both sides of the Eden.

The Solway Viaduct was opened in 1869 as part of the Solway Junction Railway crossing the Solway Estuary between Bowness-on-Solway and Annan and linked to the Maryport to Carlisle and the Caledonian Lines. Its original purpose was to transport iron ore from Cumberland to the Ayrshire and Lanarkshire Ironworks. The viaduct was the longest in Europe at the time a total length of just over 1 mile, the piles and columns were constructed of 2,892 tons of cast iron using a steam pile driver, the superstructure was of girder construction using a further 1,807 tons. There were 193 spans of 30 feet each. Surprisingly perhaps it was the crossing of the raised bog at Bowness that provided the bigger challenge in construction of the line. In the building of the bridge Port Carlisle, already struggling, was effectively shut off from any larger shipping and Silloth became the port for Carlisle.

Thursby born Thomas Bouche, engineer of the first Tay Bridge, was not given the contract for the railway or viaduct, despite having constructed several Cumbrian and Westmorland railway lines and viaducts. However, this was perhaps fortunate given the disastrous bridge failure that led to the Tay Bridge Disaster, constructed ten years after the Solway Viaduct. Despite this the Solway Viaduct was not without its troubles. In the severe winter of 1875 water froze in the columns splitting several of them, these were repaired but in the next severe winter of 1881 ice floes came down the Eden and Esk piling up and refreezing into icebergs up to 6 feet thick some 27 yards square odd feet across, these battered the stanchions and around 300 were broken leaving a damaged length of 3-400 yards, these were again repaired despite this obvious shortcoming.

Economically the line made a good start but business tailed off as this was a second line to the Caledonian line. In 1914 it closed to passenger traffic and had a brief spell of profitability during the First World War due to its proximity to the armament’s factories at Eastriggs. It was finally closed in 1931, although still used by people to cross over to drink beer at Bowness on Sunday. It was finally demolished in 1934, three men died during demolition when a boat capsized; surprisingly Though no deaths were recorded in its construction. The Iron was sold to Japan who, it is said, used it to strengthen their arsenal of military hardware prior to the Second World War.

Photographs of the extant viaduct can be seen here: http://http://www.cumbria-railways.co.uk/solway_viaduct.html