No, not some Mad Hatter-esque question posed at an eccentric tea party in Grasmere, but a serious question that concerns all prehistoric rock art/cup mark researchers. Unlike this picture, today in the Cumbrian Fells this question would be hard to address with a light dusting of snow – the dormice are, well dozing, however the low sun at this time of year is possibly the best opportunity to consider the problem.

This came to mind following a field trip to look at some recently reported rock art sites. Among these was a single cup at the top edge of a fine glaciated slab on the side of the valley just above Crummock Water, a site I feel, had it been in Scandinavia would have been covered with ritual carvings of Bronze Age boats or perhaps further north, reindeer.

But this “cup” appeared to sit in splendid isolation in a setting that was somewhat atypical for the locale. 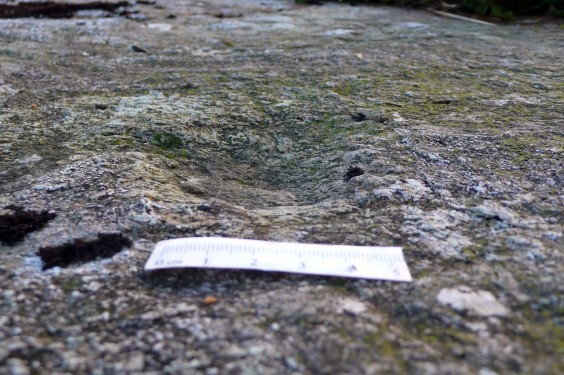 It’s base also had a hump, now this in itself does not disqualify it from being a man-made cup, a row of four at Buttermere we had agreed earlier were cups were of rougher manufacture than we expect to see normally, so it could be. But, having previously observed the lower usually submerged slab, when the lake level had dropped considerably a few years ago, it was obvious there were marks that had been plucked out by the glacial action rather than pecked by man. Had these marks been exposed to the elements for many millennia they may well have eroded into what we could see as the single cup mark above. Likewise the four we saw earlier may have eroded smoother had they been on a level rather than sloping surface

So what other criteria do we consider are appropriate to test the veracity of a possible cup mark? One is its landscape setting,  perhaps a little thorny as there are inevitably always exceptions, however we can say with a certain amount of confidence at present that the majority of the sites here are on glaciated bedrock, often roche moutonnée. 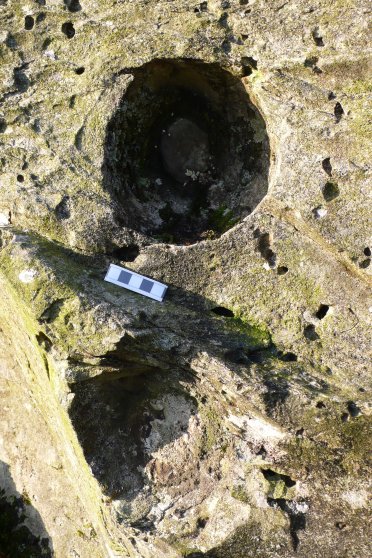 So what of the actual cupule? Aside from slabs whose surfaces are pitted with eroded glacial gas vesicles or eroded clasts – inclusions of softer rocks – we are left with the case of the odd cup or two that may or may not be of human origin.

Now a few of these individual cups are of such symmetry that they compare well to slabs where there are numerous other cup-marks.

But some do not quite cut the mustard; this rock reported as cup marked in a survey of Mitredale has many of the attributes of natural features – eroded faults and “cups” with projecting inclusions – which should have suggested that these were natural features. 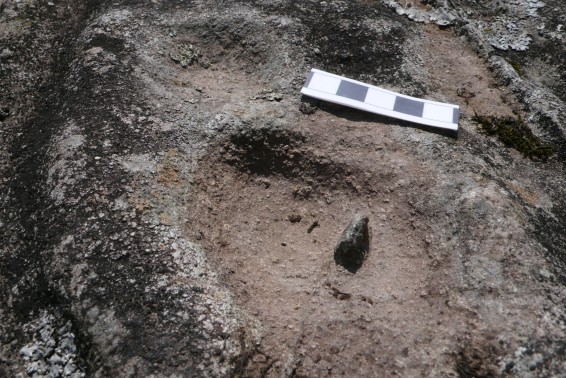 So back to the problem, when a cup is not a cup,  when it is an only cup…

A fine natural bowl from the summit of Haycock

or when it’s a bowl?

Notes: Thanks to; Jamie Lund, National Trust Archaeologist, Mark Astley, National Trust Ranger, and Tom Bell, Chester University, for discussions on these sites. If you wish to see the solitary “cup” yourself you can find it directly below LIng Crag, Crummock Water, its a fine walk, there are other sites locally that really are prehistoric cups!

Revealing the feeling and knowing of place - the UK Lake District, and beyond